This month I had decided I was going to watch one of my old favorites. I can’t really say why it was what my mind drifted there, it could simply be that it was one of my first real “horror” movie experiences.  Alas I put myself up to watching Critters (1986), which was in its day a scary movie (I had to grow up a wee bit to appreciate the humor). It also was probably the first Sci-Fi flick that I had watched, most other horror movies at that time were either based in fantastical fantasy or had it’s roots in old horror. 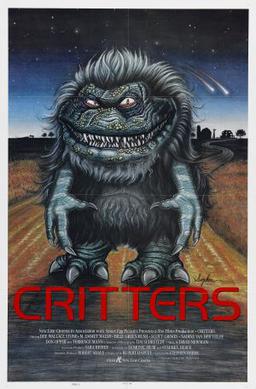 Starring: Scott Grimes (Brad), Terrence Mann (Ug), and Don Keith Opper (Charlie) and others.A small band of furry alien criminals escape prison and steal off with a space ship which they end up landing on Earth. Chaos ensues as these little monsters terrorize a small town.

Critters is a 1986 science fiction comedy horror written Domonic Muir and directed by Stephen Herek. This is the first of a four part series ( I would suggest watching the first two and stopping, maybe just the first one).  Though much like a can of Pringles you may not be able to stop after you pop the top on this series.

What I really must say about this series is that it had brought out both the scary and potential possibility of life else were in the stars. Even though for months afterwards cats dashing away on my morning paper route or at night walking home would get me to jump the thrill this one provided me left me with good memories for years to come. After watching it again I obviously don’t feel the same sense of dread and horror but do appreciate what I had after my first viewing.